Although fleas and tick can be seen with the naked eye there are also some microscopic intestinal parasites that can only be found on routine fecal examinations.

During the month of April fecal examinations will be reduced to $25.00

Here are some of those not so nice bugs we want to keep out of your pet’s life:

Roundworms– Roundworms, also known as ascarids, are the most common type of intestinal parasite infecting dogs. In fact, many puppies and kittens are born already infected. Your pet can become infected with roundworms by nursing from an infected mother or even while still in the womb. Dogs and cats can also become infected by eating other animals, especially rodents that are carrying developing worms.

Hookworms– Hookworms affect both cats and dogs, although they are more common in dogs. Hookworms are dangerous for three reasons; they suck blood, potentially leading to anemia; they can infect unborn animals in the womb and they can be passed on to humans. The best way to avoid infection is to keep living areas clean of waste material.

Whipworms– Whipworms are intestinal parasites that infect dogs only, cats are not at risk. Whipworms, which get their name from the whip-like shape of adult worms, live in the colon or large intestine of dogs. They bite the tissue and embed their heads, which allows them to suck blood and irritate the intestine walls. To prevent potential exposure to whipworms, any feces in your yard should be picked up daily. In addition, many heartworm preventives also control whipworms in your dog.

Tapeworms– Tapeworms are a parasite that can live in the small intestine of dogs and cats. The most common cause for a pet to get tapeworm is by ingesting a flea that contains tapeworm eggs in its larvae. Preventing fleas in your pet will greatly reduce the risk of them becoming infected with tapeworms.

Giardia– Giardia is a common intestinal parasite that commonly affects dogs, and occasionally affects cats. It is a protozoa that lives in the small intestine and causes diarrhea. Animals become infected when they swallow water or other substances that are contaminated with giardia. Giardia often occurs in animals that have recently been adopted from shelters or purchased from kennels. 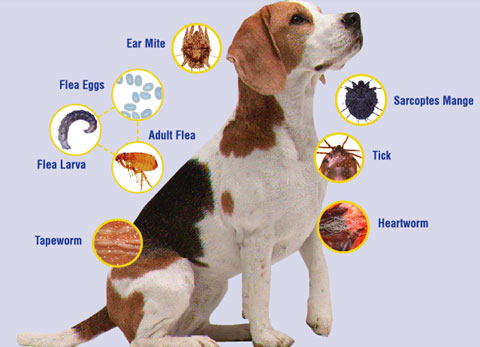